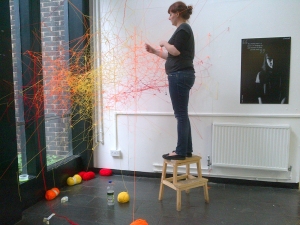 Each year the Art and Design faculty at Somerset College produces a large number of talented graduates. This exhibition celebrates the quality of the work produced by the graduates of 2012. Selected graduate artists are:

The exhibition is supported by the Reveal partners Somerset Art Works and Brewhouse Visual Arts, in partnership with the school of Art and Design of Somerset College. 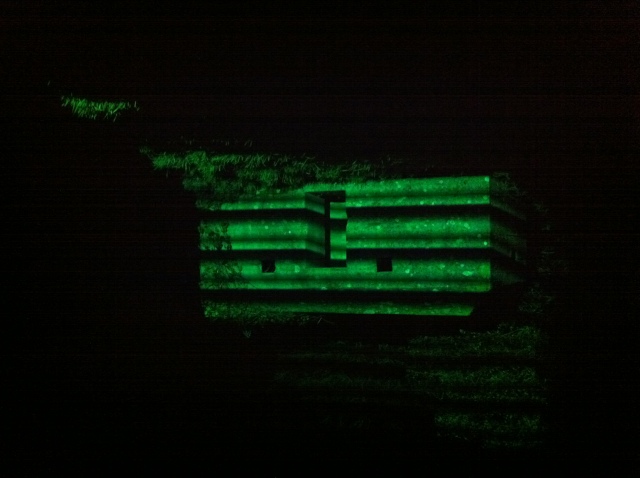 lluminos are a lighting designer and film/installation artist brothers. Using website,
archive, projection and endurance, for Maximum Exposure Illuminos will be creating a
unique video projection event along the Taunton Stop Line. Built during World War II, the
Taunton Stop Line consists of hundreds of ‘pill boxes’ – military bunkers designed to stop a
potential German advance from the west. Over the course of ten nights each pillbox will be
illuminated and projected upon in turn, using imagery and iconography from the structures original usage. Stopping at ten sites each evening, by the end of the ten days one hundred structures from the Stop Line will have been brought into the light.  The project forms part of the Lightwaves contribution to the Cultural Olympiad.

Josh’s free exhibition was open for anyone and everyone to walk in and become a guinea pig for his invention – described as “a stereophonic headset using binaural audio with 3D HD cameras and LCD goggles allowing capture and display in one!” 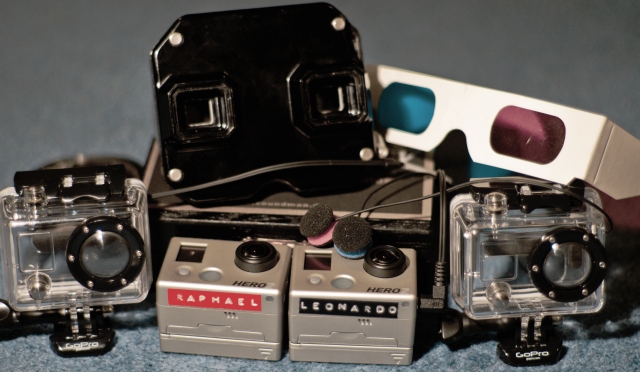 I have had a lot of fun making this contraption. I have never invented anything and the opportunity to do so was a thought expanding process, finding simple ways to recreate something complicated in my head one step at a time.

Having Studio Manager Will Bix’s time to collaborate with at the Engine Room was brilliant as he has the mixture of growing up with toy maker parents practical experience and the techie know how from the behind the curtain parts of the film industry.

Over the two days with Will my uncertain idea was a working prototype that I could use!

“It reminded me of ‘Dan Dare’ of the comic ‘The Eagle’ which was published in the 1950’s. I am no scientist but I think it could be used by the armed forces”

I feel that besides the set back of having to wait for replaced broken parts and a guinea pig on the helmets nose bleeding – it has been an opportunity I am really grateful for as I imagined something and saw it through to being a reality. As I keep calling it a prototype – this feels like the beginning of something new that can be developed – and I thank Reveal Innovation and Somerset Film for allowing it to get off the ground.

Josh’s show was made possible through a Reveal Innovation Award. This is an annual bursary for a visual artist to develop new digital work curated by the Reveal partners with support from Arts Council England.

Results from the 2011 Reveal Survey

Reveal partners The Brewhouse Visual Arts, Somerset Art Works and Somerset Film carried out this survey to research in to the future of visual and digital arts provisions across Somerset.
Local representatives were asked to answer questions as fully and as candidly as possible which has given an insight into the working practices, income and development needs of the 70 artists, educators and makers who responded.

The responses highlight that the majority of artists practice in more than one area mainly making and showing second to teaching and producing. 95% of the participants state they work from home most owning their own studio / workshop space. Nearly all of those who don’t own space would like to rent affordable space depending on where it was situated and the cost.

Key professional relationships for most artists are within Somerset the main locations are Taunton, Bridgwater and Bristol with a small percentage also listing professional contacts in London, Nationally and internationally. Two thirds of the artists surveyed find networks important to what they do stating peer support as a top importance as well as the chance to meet contacts / clients, promote work and find out about opportunities.

The traditional method of showing work in exhibition and gallery spaces is still used by most of the artists who responded to the survey, however all together out of gallery installations, public spaces, studio and on-line sites are all used just as much by the artist to show work. 80% of the artists surveyed know the audience their work is shown to but just a third of audiences come from within the county. Email and word of mouth are most widely used to communicate with audiences, second to print and social networks, gallery mailing lists and marketing are also heavily relied on by the artists.

The percentage of income made from an artists practice is on average 20% with only 28% of the artists surveyed making 100% of their income from their practice.

When asked what would be need to develop professionally most answered more commissions / bursaries are needed, more time, critical dialogue, peer support and work space with barriers to professional development including finance and lack of opportunities but distance and isolation play a big part in almost a quarter of those surveyed.

Pictures From A Night Of Light Friday 30 September 2011

A one of chance to walk through Hestercombe Gardens in the evening and see an extraordinary range of artworks by regional and national artists.

led by the Engine room team

England My England Micro Festival at the Taunton Brewhouse

Below is the film that was made during the week:

Artist Richard Tomlinson with Engine Room film-maker Dharam Barrett facilitated a  series of workshops to help the Meeting House to address its priorities around engaging children and young people.  Led by Somerset Art Works with additional funding from Short Breaks and Arts Adventures to enable  a wide range of families and young people to become involved..