Local was the new global in Wells

What do a swan ornament, a giant mirror ball, a prototype magazine and Royston Vasey’s ‘local shop’ have in common?

They all featured in the Reveal 2012 conference last Thursday, 22nd March.  Watch this space for a video from the event – meanwhile, you can find out more here.

Artists and arts professionals gathered in Wells Town Hall with the Reveal Somerset team to explore the importance of the local on the international art stage, with presenters:

The morning was a chance to find out about their work through presentations.  Yulia outlined Open Place’s strategy fo

r intervening in the social politics of place, and gave an insight into several of their key projects including Start Time (Hydropark, Kiev) where participants played a traditional game with a mirror ball which represented new influences and consumer culture; and Subbotnik, which had volunteers planting up a flower bed that grew into a picture of Lenin.  You can watch videos of these and other projects and find out more about their work at www.openplace.com.ua

Kathrin introduced myvillages.org and International Village Shop, a trans-local project which harnesses the social currency of local produce and resources.  International Village Shops include/have included Höferwaren (Höfer Goods) which is managed by the women of the village, Ballykinlar Village shop, and a series of one-hour village shops in West Bengal.  Alongside and through the shops myvillages.org instigate Collective Product Developments such as a ceremonial spoon branded with the Hofer frog, and the Chompost Bar (made of Royal Parks compost) in Hyde Park, London.  www.myvillages.org

Karen Lubbock explained the development of Karen magazine, ‘a magazine made out of the ordinary’, which comes from Karen filtering encounters she has through daily life and the information, material and experiences that her neighbours share with her.  Her values include a duty to honest and true representation and a commitment to allowing each contributor to edit their own content.  The magazine is now distributed internationally and you can get the latest copy and find out more through www.karenmagazine.com

Simon introduced OSR projects, a transitional Somerset based artists’ group working from the hub of the Old School Room studio and project space in West Coker.   They work collaboratively and respond to place and context.  Simon brought with him his customised bicycle from OSR’s 2011 project Under a New Sun and parked it in the Town Hall foyer.  Find out more at osrprojects.wordpress.com

Karen Gaskill did a whistlestop tour of Maximum Exposure, the series of three commissions she has curated for Somerset Art Works uncovering idiosyncratic features of the county.  They include the recently finished Taunton Stop Line, where over 100 pill boxes became temporary screens for work by Illuminos over the space of an intense ten days.  www.somersetartworks.org.uk/projects/maximum-exposure

After a jolly fine lunch provided by The Good Earth, everyone got stuck into a workshop.  Karen L’s group gathered source material for and designed a magazine in 45 minutes, called Sharon (Wells based cousin to Karen); Simon’s ran out to indulge in a small spending spree and made A Gift for Our New Friends; Kathrin’s group devised potential International Village Shop products and strategies; and Yulia and Yuriy’s group used a card game structure to sketch out potential public engagement projects for Somerset.  Pictures speak louder than words… 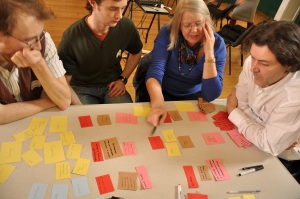 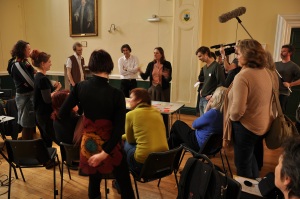 Keep an eye out on the Reveal blog for more images, film and fallout from the day.

And by the way, the Royston Vasey ‘Local Shop’ reference was Karen Gaskill’s – she used an image in her presentation to epitomise exactly what the local is not.  As delegate Sue Palmer said – pure genius, because it encapsulates those hazy one-dimensional preconceptions that we city dwellers can harbour.